It has been four years since Sun’s Marc Hadley put forward his proposal for a Web Application Definition Language. Since the arrival of the WADL, we have seen the API Economy boom and an almost overwhelming swell towards REST and away from SOAP. Given that the WADL was intended to be the RESTful answer to SOAP’s WSDL you might have expected that the volume of WADLs would be rising in equal proportion. Somehow it hasn’t happened like that, so what’s going wrong?

The basic idea was that the WADL defined your REST interface in a way that machine generated code could consume it. After all, APIs are aimed at machines more so than humans. But a review of the clients that have actually committed code to the WADL specification suggests that outside of the Java community take-up hasn’t really happened, and even within Java it is fairly sporadic. To understand what’s going on here, let’s dig a little deeper into what a WADL currently offers. 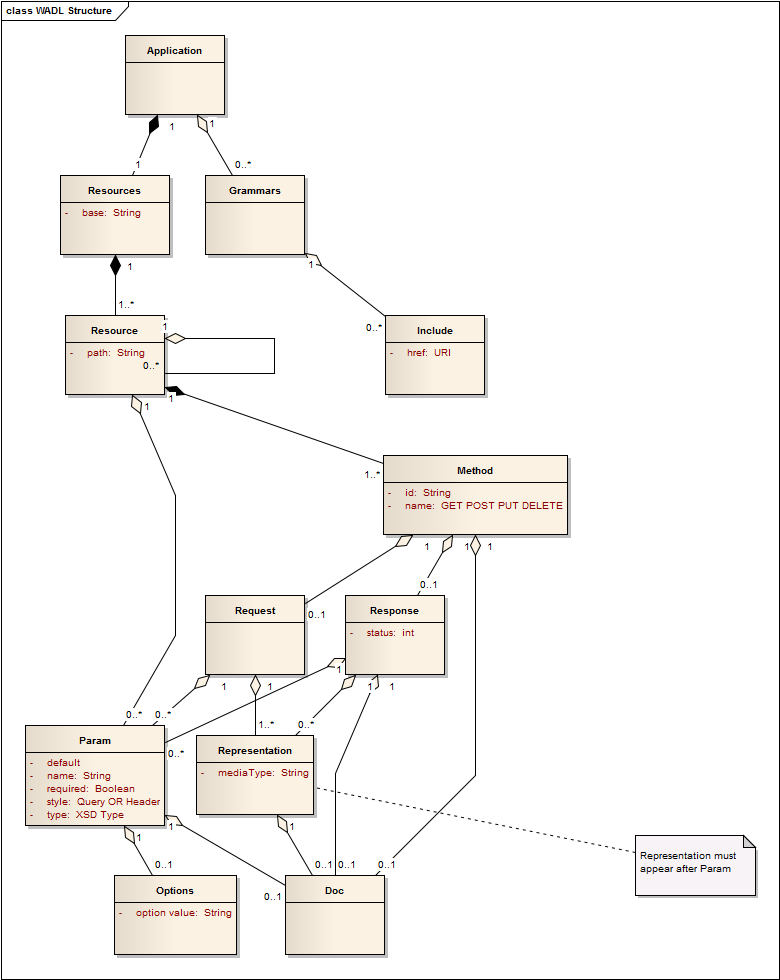 From this UML summary of a WADL you should be able to see that a number of resources have been defined and attributed a URI, together with a method and HTTP verb. Within the resource definition are the details of the request/response cycle. For a full description try the Apigee WADL reference or the original submission to W3C .

Detractors of the WADL talk about true Hypermedia clients exploring the interface through the API responses. I think this is valid. But defining the contract between the client and the server is not the only purpose of a WADL. It can also be a general description of how an API is supposed to behave, even an API that hasn’t been built yet. Commissioning an API requires the establishment of a different kind of contract; a contract between a Business Owner and an API Designer. Using a WADL to express an API design maybe a side-effect of the original purpose, however this discussion is really more about using a WADL in the context of API design than it is about implementing a REST client.

Much of the original motivation for the WADL seems to have been around providing a simple and immediate alternative to the WSDL. The fact that it hasn’t been widely adopted suggests that the specification has gone too far the other way. Is it overly simplistic? If so, what is missing – what should a future WADL specification contain in order to overcome these limitations. Here is my WADL wishlist.

UML and Documentation
Most software design is done using UML. When it comes to applying the REST architectectural style there is surprisingly little around in the UML world. For example, the popular UML tool Enterprise Architect supports only WSDLs. This is awkward when attempting to visualise RESTful designs in an Enterprise context. An experimental attempt at bridging this gap is the eaWadl tool that imports a WADL into Enterprise Architect (disclaimer I wrote it).

In addition to using the WADL as part of the design process, another good use-case is documentation. For example, the Web Application Definition Language is used by Enunciate as a framework for human-readable content. The flexible <doc> tag really helps as it allows sample JSON or XML payloads to be embedded alongside the request and/or response. A common and effective ploy is to render the WADL documentation as HTML in response to an Accept Header of text/html (which a browser sends by default).

State
With a Home Document you don’t need a WADL to define the interface up-front, just grab the index and off-you-go. This is the logical extension of the Hypermedia approach. To explore this idea, let’s imagine that we have a REST interface to describe a game of chess. It should be straight-forward enough to imagine how each chess piece could be given a resource endpoint that would describe the various behaviours of each piece. For example a GET /pieces/king would provide a response that says move one square in any direction. Okay that’s fine. But what if we want to record a game of chess? This is a whole new tin of worms; that of managing the state of the game board. For example PUT /board/12/60/Qf2+. In it’s response the server should be helping the client to manage the application state by offering a link to /board/12/60. This is because only the server knows (with authority) that the game on board 12 is on the sixtieth move, that the White Queen has put the Black King in check and it is now Black’s turn.

In this scenario a WADL can be comfortably used to define the static reference data:  GET /pieces/king. But because the game state is (obviously) unknown at design time, a different approach is needed. The approach should involve making general statements about the Hypermedia syntax used by the API to maintain state. The request and response elements offered by the current WADL don’t constrain how the syntax should be defined. But I would go further and argue that it should. Elements such as <id>, <rel>, <class> and <href> have become so baked into Hypermedia designs that they deserve an exclusive place in our new generation WADL.

Cross-reference
A general issue with APIs is that of API discovery. How are you supposed to find out about the existence of an API in the first place? And if you are managing a group of related APIs, how does the discovery of one API help you find out about the other members of your API family. Google have tackled this problem through their discovery API. But what about everyone else? As the WADL already allows us to reference external Xml Schemas, why shouldn’t we be able to reference other WADLs?

With over 9,000 APIs currently registered on Programmable Web cross-referencing should help bring some organisation to the API space.

Inheritance
It’s generally polite to reply to a question in whatever language was used to ask the question. Consequently it’s annoying that each <request> and <response> declaration needs a separate <representation> tag. Although the WADL is hierarchical there is no sense of a child node that inherits from the parent. Wouldn’t it be easier to declare the base representation in the root <resources> tag, and use the child nodes to override any exceptions?

Non-functionals
Functionality is one thing, but if the security features of the API disallow access then it’s game over. If our new WADL has helped you discover an API then it seems logical that some declaration of the required authentication is made at the point at discovery. For example <authn> and <authz> tags might have values such as “oauth” or “x509” together with a <profile="developer.example.com/register"> statement for humans. Similarly a <status> parameter could broadcast downtime whenever an origin service becomes unavailable.

Error Handling
While you can get a long way with HTTP status codes many error responses are specific to a particular domain. A common strategy is therefore to return a <code>200</code> to show that the underlying HTTP communication was successful and then maintain a set of API specific error codes. The status attribute of the <response> element should be able to document the existence of the bespoke messages.

Interpolation
APIs are deployed in multiple environments. In reality the <resources> tag is likely to resolve to a number of hosts.

Rather than relying on an external tool (such as Maven) it should be possible to abstract the hostname for use in multiple environments.

JSON + node.js module
With NodeJs currently the most second popular download on github, the march of JSON seems set to continue. WADLs are of course expressed using XML. Frameworks such as deployd illustrate the immediacy of using Node to define and create a REST service. With a little work, it’s possible to start this process from a WADL. With a bit more effort it would be possible to encapsulate the WADL import process using an Node module, similar to the work underway at RestDoc.

In summary, we should stick with the WADL not particularly because of it’s original intentation as a machine-readable definition of a service, but because the process of designing and developing APIs is lacking a reference language. The WADL just seems like a sensible place from which to embark.