Once again I was lucky enough to attend an API Days event. This year the conference was in Barcelona. The scale of the event was noticeably increased compared to last year’s conference in Madrid. This time the venue was the Mobile World Centre in Plaza Catalunya, opposite the Bank of Spain. This in itself is perhaps an indication of the rapid evolution of the API industry.

This post is a reconstruction of my scribbles over the two days.

Notes from the Kin Lane, The API Evangelist.

Don’t invent the wheel – use familiar patterns. For example, an API describing a profile should consider something like /me used on Facebook.

APIs and value chains from 3scale by Manfred

The Power of /me from Bruno Pedro. An overview of the battle between the online giants for ownership of user identities, with a quick dip into OAuth2

Examples of real-time APIs and webhooks

Source code from the demos is available here

Each topic is covered in more detail

Streaming is based on all the tweets, an average of ~500 million tweets per day exposed through Firehose.

Another example, the Brit Awards peaked at 78k tweets per minute. The endpoints are simple.

The sample endpoint streams one percent of the entire Firehose. You need some serious infrastructure and commercials to consume the whole thing. The Twitter Streaming API uses long polling to hold a connection open. The Twitter recommendation is that stream consumers use a single client running on their network (something like Node.js) to harvest and filter tweets. The client would then use web sockets to push notifications out to website visitors.

Another cool thing is the Amazon integration with Twitter allows users to add items to their shopping cart through #AmazonBasket.

Here’s that photo taken by a tweeting Raspberry PI (I’m in there somewhere). 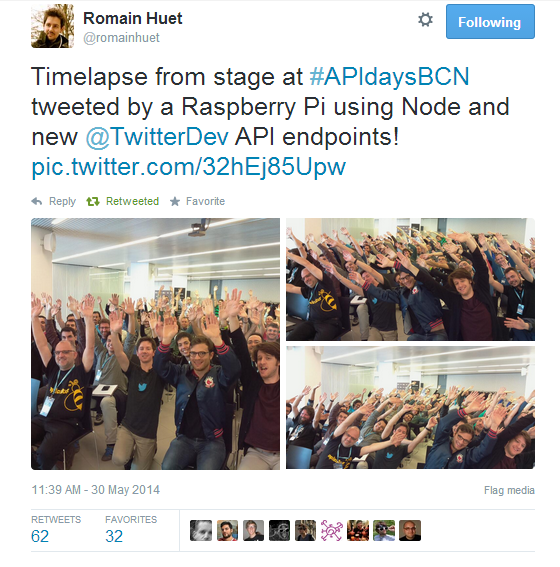 Dropbox have recently added support for datastores to their APIs. This turns a dropbox folder into a NoSQL database, located in the cloud.

The user account defines the quota. And here’s an example that uses datastore to hold game state and high scores

Big data for free (as in beer)

Using Dremel an open source java implementation of Google Big Query and Redis is in there too.

Tools and Tips for API Designers

Slides from the conference

API design at Heroku from @brandur

Insightful review of the API design process undergone by Heroku. The APIs control access to the Heroku platform and prior to the release of v3 was extensively re-designed. The API is innovative through it’s use of JSON Schemas. Heroku have generously published the API guidelines that were developed as a result of the process.

Example of API that uses Hypermedia well (from Ori Pekelman)

In true Hypermedia style, this is the only published endpoint – everything else is through discovery

Example from Salesforce of a Mobile API using Angular

Use PATCH for partial updates

problem: two PUTs in a race condition but only one can win

More on PATCH. Use a 202 response for non-deterministic operations.

Ronnie Mitra from Layer 7 presented a tool for prototyping API designs. Using a drag-n-drop interface the tool allows an API designer to create API endpoints as “cells”. There is some automation for the process of creating dummy request / responses and also support for Hypermedia-style linking. Ronnie promised me that it will export to WADLs and other API specification formats.

Finally here’s a picture of the main man, KinLane.